Rails 6 Beta has been out for a short while now, and it comes with a long list of improvements and new features.

Today we’ll look at one of the larger additions to Rails, which is the new Action Text framework.

Action Text enables rich text content and editing in Rails straight out of the box. It uses Basecamp’s Trix Editor, which is a neat and modern editor that is highly customizable.

Let’s install the latest Rails 6 Beta release and try it out!

First a word of warning: Rails 6 is a major version upgrade and there is a good chance it will break your existing application. If you are not ready to upgrade, try this out on a sample app first. Read the changelog for the details to find out if your app will be affected!

Rails 6 requires Ruby 2.5 or higher, so make sure you have that installed. I recommend rvm or rbenv to separate different Ruby versions on your system, but this step is up to you.

Once you have the correct Ruby version, I’d also make sure to update bundler for good measure. Then let’s install the Rails beta. Take care to separate your gemset if you don’t want to update your Rails gem just yet. I usually separate rvm and gemsets, and use docker for most development projects, so I can just upgrade without breaking other environments:

The --pre flag should get you the latest code and upgrade your Rails gem. A quick rails -v should confirm that you are indeed running the latest version, which at time of writing is Rails 6.0.0.beta1.

So now we can create a new app:

This might take a while and will eventually leave you with a new Rails app running the latest code.

If it does not, or you want to upgrade an existing app, open your Gemfile and change the first few lines and the rails gem to look like this:

Then run bundle update rails. In this case you’ll have to go through the upgrade process though (rails app:update), so in this example I prefer to start clean.

At this point try to start your server with rails s and open localhost:3000. If you get any errors, for example complaints about your sqlite gem version, you can fix it by specifying the sqlite gem in your Gemfile:

Rails should be happy now: 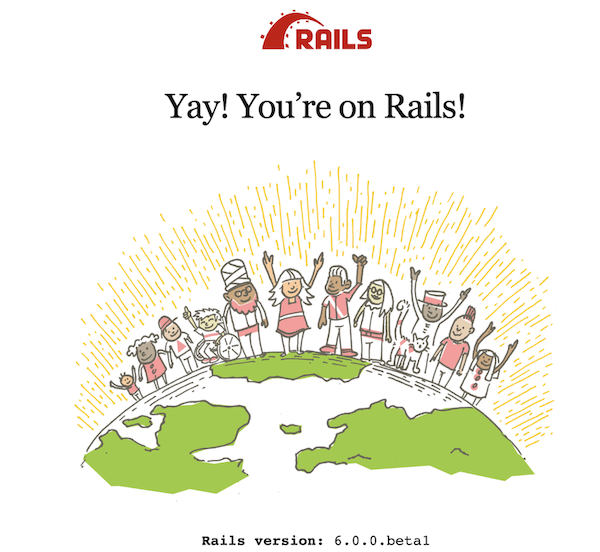 First we need to install Action Text and its assets:

Then we need to create a scaffold with a model to hold our rich text field:

If you get errors about the directory being already watched, you can ignore that at this point.

We’ve added a title field of type string to the model, but we still need a way to add the rich text body. Open the model and change it to add the new Action Text class method has_rich_text and specify a field for it:

Then start the server and navigate to http://localhost:3000/posts/new.

You’ll notice that the editor has already been included with a default styling and you can simply start using it! If you want to customize the editor, I suggest to start at the official documentation.